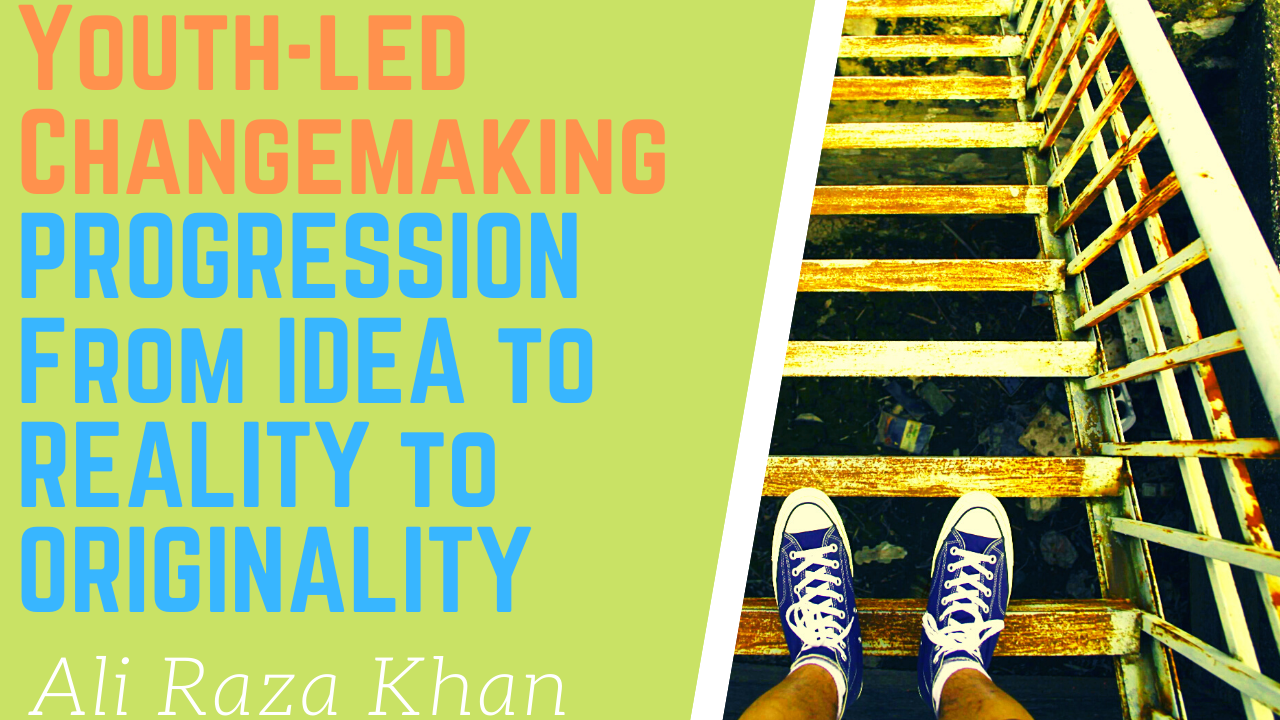 Youth-led Changemaking PROGRESSION From IDEA to REALITY to ORIGINALITY

From young people with many limiting beliefs, to coming up with a first idea and being able to bring this idea to reality in an environment of Trust, to then going back and adding originality and innovation to their projects.

In this video, Ali Raza Khan shares, why it is so important to get the first step right, to give young people the chance to experience themselves as changemakers for the very first time.

Because once they have done that and have broken through their limiting beliefs that society has given them, then they can go on to the next stages of innovation and originality and really contribute much more value in society.

Rough transcript of the video:

“The most fascinating thing in Youth-led Changemaking is that it helps young people to transform their idea into reality. I think the first thing for me is, which is very important, is to help young people break the old paradigm.

I don’t care basically what young people do at the beginning unless and until they do something which creates social and economic impact. Because once they break the old paradigm then they will automatically move towards the next stage which I call the Originality stage.

Because once you transform your idea into reality, then you come to know about your own strengths, about your own weaknesses and when you are aware of it, then you decide how you would like to go forward.

And once you are aware of your strengths most importantly and weaknesses then you also work hard to improve them. And that is a better model than the educational model where you are not being assessed before they provide you knowledge and skills.

They try their products in the real field, they face problems, they revise, they improve and they go back and try it again. So through this process they learn a lot. You know, although it seems like they are involved in a business activity, it starts as a business activity but then moves into many other domains. Like political domain, legal domain, social domain, spiritual domain. T hey have to decide many things about it.

So it is not a small thing you know.

And we have seen how young people have shifted their focus over time from a simple idea to reality and then to originality and then on to continuous self-improvement.

So I believe that it is a great way to help young people to break their shackles and to come out with an idea.

Initially it is difficult. I see that most of the times young people come up with incremental projects. They just sometimes try to arrange a project or create a project. But once after getting this experience they are in a position to expand and add innovation into it. And this is where I think the innovation part comes into play. And this is where young people realize what they can do and what they can achieve in a short period of time.”

Effective Method to Turn Youth into Changemakers and Young Entrepreneurs